One way to facilitate knowledge exchange, which may benefit researchers and users beyond project years, is to collaborate with projects and organisations that address similar societal challenges.

While TeNDER’s integrated care model focuses on people affected by Alzheimer’s, Parkinson’s, and cardiovascular diseases, the results of the project and its assistive technology system may contribute to the development of alternatives for other types of patients.

Fundación Querer uses the benefits of ICT-based technology to support children and adolescents affected by neurological disorders. Founded in 2016, the organisation offers educational resources and conducts research and awareness-raising campaigns.

One of Fundación Querer’s core educational projects is El cole de Celia y Pepe, a school that supports students with severe language and communication difficulties that stem from neurological disorders. The programme runs for 11 months in Madrid. It offers individualised attention, involves parents, and aims to develop greater autonomy in students.

Their method combines the (1) elaboration of a comprehensive behavioural profile; and (2) a Magnetic Resonance Imaging (MRI) component. The aim is to “profile language behaviorally across the different populations available in this school and study [the] connections and disconnections between linguistic and non-linguistic cognitive profiles that can feed into new educational approaches and tests.”

During the COVID-19 pandemic, El cole de Celia y Pepe has not only continued to support its students, but it has also created online access to resources for children with special needs across the world.

Both TeNDER and Fundación Querer demonstrate how ICT-based tools and digital technologies, when done right, can help all walks of life.

The focus needs to shift to slowing down the progression of a disease and making the best out of the situation in such a way that enables people to be as healthy as possible, and in turn, live the best life possible.

Even as contradictory ‘facts’ circulate, all sides of recent debates assure us that they appeal to truth and fact. Each side accuses the other of being misinformed and spreading misinformation. These words are not misunderstood; indeed, a vague agreement of their meaning exists amongst all users.

From 20 to 22 October 2020, Alzheimer Europe hosted its 30th conference online (due to COVID-19 restrictions).

The very concept of system co-creation already hints at its main goal, which in TeNDER is to include all participants (patients, families, caregivers, and professionals) in all stages of the development of an innovative ICT-supported integrated care solution.

By engaging in this process, TeNDER helps ensure that our tools to detect emotions and mood changes are fit-for-purpose and will genuinely contribute to an ecosystem that supports users’ quality of life. The tools that will be deployed in each pilot setting will be adapted to the needs of each participant.

Participant involvement at different stages in the project will also help us build trust and empower users. TeNDER’s approach to integrated care is, after all and above all, person-centred.

Preliminary pilots are set to launch soon with a cohort of people affected by Alzheimer’s and other forms of dementia, as well as people with Parkinson’s disease, and Cardiovascular disease. To receive progress updates and other information please subscribe to our newsletter (scroll to bottom of page and enter e-mail) and/or follow us on Twitter and LinkedIn.

21 September is World Alzheimer’s Day. On a so-called ‘normal’ year, people around the world would mark the occasion with a ‘Memory Walk’. Every year, the walk brings together people with dementia, their family members, friends, and those who work to improve their quality of life. This year, however, most activities across the world will adapt to the new reality of COVID-19.

Despite the adjustments, the online ‘gathering’s’ aims remain the same: to help raise awareness and funds for research, public health policy advocates, and the organisations that support patients and their families. Not to mention that it is more important than ever to share the message that they are not alone!

TeNDER seeks to extend the independence of people with chronic illnesses such as Alzheimer’s and improve the quality of life of patients and those who surround them. As a newly formed consortium of experienced partners, we join global efforts to raise awareness and promote research year-round. 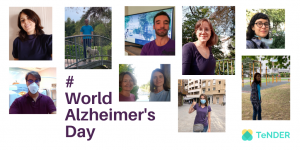 We have also compiled resources in English about:

If you want to receive updates about TeNDER’s progress, sign up to our bi-annual newsletter by scrolling down to bottom on our website and entering your e-mail address.

The European Union’s Framework for Research and Innovation (Horizon 2020) funds projects that not only meet rigorous research standards, but also strive to address societal challenges. Each of these projects include partners from diverse sectors and hail from different disciplines. For example, they range from the social sciences and humanities to the medical sciences.

TeNDER and FAITH both fall under the latter category. For the next three years, they will pilot assistive technologies supporting the quality of life of different types of patients.

TeNDER will pilot an integrated care approach for people affected by Parkinson’s disease, Alzheimer’s (and other forms of dementia), and cardiovascular disease. Using familiar and accessible tools and applications, TeNDER will help patients stay connected and feel safe in their environments. For example, health bands that monitor vitals and affective recognition software will alert a patient’s health and social care system to potential or ongoing health crises.

Other services will assist patients in their day-to-day lives. This may mean, for example, helping them connect to local pharmacies, to cleaning and food delivery services, and so on. TeNDER does not replace patients’ contact with those who surround them. Rather, it helps link their environment to support their independence.

Harnessing the potential of Artificial Intelligence, FAITH will develop and pilot an application that identifies and analyses depression markers in people that have undergone cancer treatment. The project’s primary goal is to help patients be more aware of their mental health situation. This allows them the possibility to improve their quality of life.

FAITH will collect and monitor a range of health indicators. By analysing them, FAITH can infer information about the mental status of a person in a non-intrusive way. However, it does not aim to replace clinicians at all. Rather, it works in support of clinicians, providing them an additional tool for their practice.

Over the course of three years, TeNDER and FAITH will work to support the quality of life of different types of patients in diverse settings. Both consortia also aim to make their approaches fit for widespread implementation. This way, they can benefit patients beyond the scope of the projects. We look forward to collaborating throughout this undertaking to amplify our voices and support each other’s aims for the benefit and health of patients throughout the EU.

In this article, we will focus on the impact that it has had (and continues to have) on people affected by Parkinson’s disease and share the strategies Asociación Parkinson Madrid developed during the lockdown in order to alleviate this situation.

With the purpose of presenting assorted information in a unified, integrated, and understandable way: one must ensure that different devices, platforms, and networks are able to communicate with each other and that the data is open and available for use. Interoperability amongst different systems is thus a determining factor.

SPO introduced the project, its goals, and details about the services that TeNDER’s integrated care model will provide. Following the initial presentation, participants discussed the upcoming TeNDER pilots in Slovenia, which will be tailored to people with mild cognitive impairments, Alzheimer’s disease, and other forms of dementia.

Participants noted our emphasis on co-creation to be amongst the project’s strong points.  Indeed, TeNDER’s clinical partners frequently underscore the importance of including users in the development and design of solutions to help ensure usability and a person-centred approach.

During the discussions, however, participants expressed concerns regarding the risk of intelligent support systems replacing the services provided by formal caregivers. They stressed the importance of personal contact and face-to-face interactions, and that these should always remain central to care provision. Partners are mindful of this and emphasise that TeNDER’s integrated care approach does not seek to replace personal connections or formal care, but to support patients and those who surround them.

The feedback TeNDER partners receive from users is essential in the preparation, implementation, and the concluding phases of large-scale pilot projects. Focus group meetings are but one way in which TeNDER will reach out to and work with users during the life of the project.